Cd’A Magazine: His and Hers, When Muscle and Soul Collide

Home > Blog > Cd’A Magazine: His and Hers, When Muscle and Soul Collide 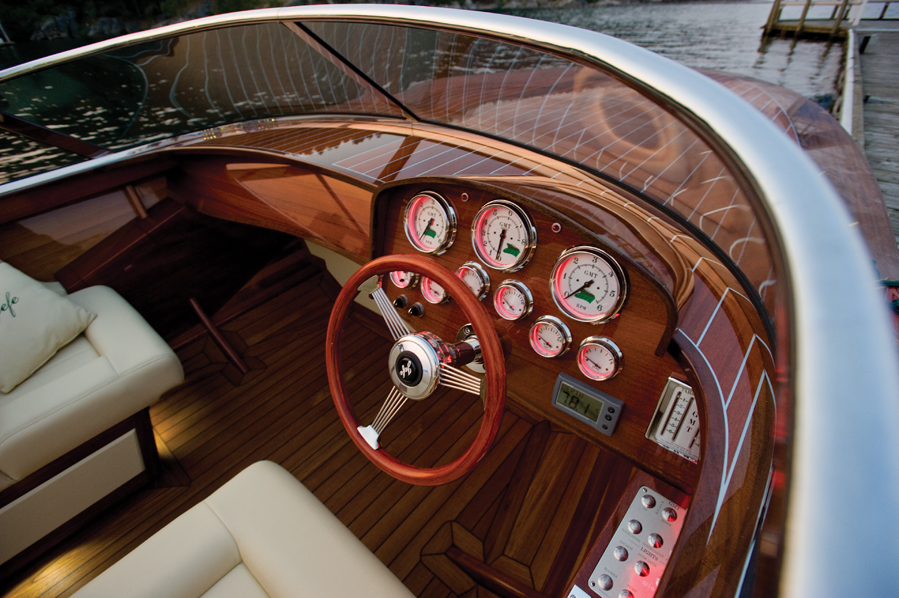 At the helm is Jerry Gilbreath, a legend in the world of boats. Typically, with this guy at the controls, one might want to hang on tight. After all, in his career as a champion offshore powerboat racer, he was known as one of the fastest throttlemen in the business. But today the ride is silky smooth. And when he punches the throttle, it just gets smoother. Where a typical boat’s bow would rise up unwieldy into the field of vision, the sweet lines of this mahogany craft stay fixed right on the horizon as the boat rockets forward. “It’s one of the things my wife, Donna, made me promise she would have in this boat,” he says

We’re fortunate enough to be taking a ride in Jerry and Donna’s new pride and joy, a custom 34-foot mahogany runabout they named Jefe.

We leave the marina behind and set the bow toward Arrow Point. Jerry eases the throttle up to speed and adjusts the boat’s trim with a practiced hand. We are now flying along at exhilarating speed. But this speed is deceptive. In the boat’s cockpit, we feel little or no wind. And the hum of the boat’s engine has hardly increased. Jerry smiles.

“That’s the other thing I promised Donna,” he says. “No wind, and no noise.”

Although Jerry’s career was spent running fiberglass craft, he fell in love with the soul and style of wood boats on a trip to Italy during the height of his career. On the colorful waterfront of Lake Como, he watching the Italian Riva boats cruise past, and thought to himself: One day, I’d like to have one of those.

Fast forward a few years later. Jerry and Donna have met at – where else? – a speedboat race in Southern California. They have married and raced boats at some of the most exciting venues in the sport, winning nine world championships along the way, and eventually retiring to a summer home in North Idaho. With Lake Coeur d’Alene beckoning outside their windows, it was finally time to build the boat of their dreams.

What caught their eye was the stunning Sizzler, a 60-foot gentleman’s daysailor that had just been launched on Lake Coeur d’Alene. Jerry and Donna went for an evening sail across the lake aboard Sizzler. Just minutes into the sail, as the boat heeled into a light evening breeze and sailed toward the setting sun, Donna turned to Jerry and said, ‘I want one of these!”

So it was off to The Resort Boat Shop, a division of Hagadone Marine Group, which created Sizzler and a number of other wood boat projects. Taken together, the craftsmen there have more than 150 years of wooden boatbuilding and restoration experience. The Gilbreath project became the shop’s newest focus.

“From the beginning, this was an intriguing project,” says Craig Brosenne, manager of Hagadone Marine Group. “Jerry and Donna are exacting owners with a clear vision for excellence, and that’s where we excel.”

The Gilbreaths wanted a combination of beauty and speed, muscle and soul, style and substance. It would take a combination of traditional materials and new technologies. The hull is cold-molded construction using epoxy resins. The base is Alaskan yellow cedar, topped with three layers of African mahogany laid on their bias. This process provides versatility of design, coupled with exceedingly high material strengths. Jefe is finished with 30 coats of Epifanes varnish finish on the topsides and decks.

“I picked The Resort Boat Shop to help me because I like the way they build,” Jerry says. “They pay meticulous attention to detail, one step at a time, and that’s what I wanted for my boat.”

True boat aficionados will notice the greatness in the details, like the way the shades of mahogany planks at the bow are symmetrical. Absolutely everything on the boat was designed for a reason.

The entire boat is unique, from the throttle handles to the cabinetry to the hull shape. The beautiful dashboard includes custom Livorsi gauges, Latham throttles, and a tilting Latham stainless steel helm. Jefe has top-end ultra-leather materials with mahogany and teak wood accents. Built-in amenities include a mirrored beverage bar and a removable cocktail table. The name Jefe is Spanish for chief or leader. The Gilbreaths named the boat in honor of a friend in Argentina.

“I’ve had this boat in my head for about the last 20 years,” Jerry says. “The guys at The Resort Boat Shop literally built my dream.”