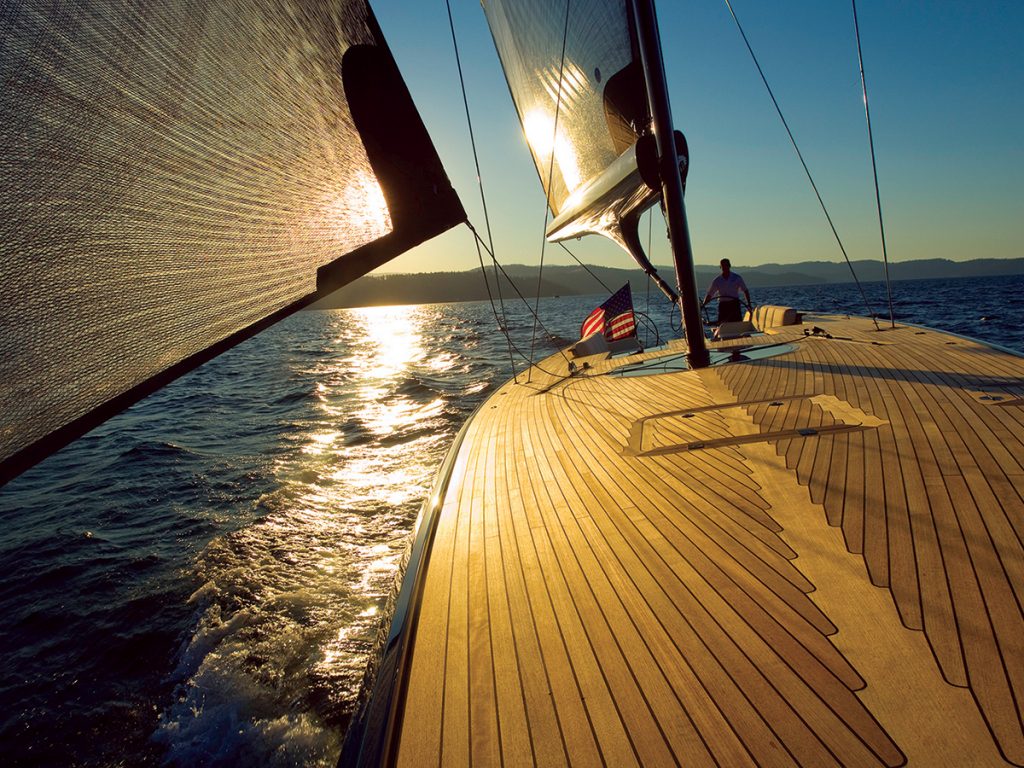 Could there be a better way to escape the pressures of day-to-day business than to set sail in search of a breeze on a 60 ft yacht? Likely not, especially when you can be alone, away from the dock, and under full sail in a matter of minutes – literally at the push of a few buttons. Media mogul Duane Hagadone came up with the idea of a custom daysailer during his circumnavigation of the globe on celebrated 205 ft Oceanco Lady Lola. “Ever port we’d go into, I’d go looking for an automated daysailer. And I never saw one,” says the keen mariner, who now finds time as often as possible to escape the office on his sleek, purpose-built daysailer Sizzler on picturesque Lake Coeur d’Alene – where he grew up and still spends much of the year.

Hagadone’s brief for the 60-footer was beguilingly simple. He wanted a boat on which he could go sailing on a whim, either single-handedly or entertaining friends. Above all, she would be easy to use (at one point he even considered building a voice-activated vessel) and be highly accessible for those less mobile to board comfortably.

The successful newspaperman and five-star resort owner knows a thing of two about boats. One of his companies, The Resort Boat Shop (a division of Hagadone Marine Group) builds exquisitely crafted lake motor-launches, and the owner himself travels daily from his lakeside home to his waterfront headquarters in an African mahogany commuter boat. Coeur d’Alene itself is a hotbed of wooden boat building – it hosts an annual festival that draws some 80 exhibitors.

Realizing the project would take a special set of skills, and desiring a unique design, Hagadone approached Richard Hein – the architect and builder of Lady Lola. Hein in turn contacted noted marine designer Tony Castro to commence the exploration of the brief.

Castro – who made a special visit to the 30-mile-long lake to fully understand its conditions before commencing the project – was truly enthusiastic. However, when he went looking for builders around the world who might execute a vessel which – in Hein’s words – had plenty of “sizzle,” they came up short. Then it dawned on Castro. The obvious place to build the vessel was right in the clients own backyard, at The Resort Boat Shop – even though the company had never thought about sailboats before, let alone built a customized 60-footer.

“I knew there was already a boat culture there,” says Castro. If they were ready to learn, he would guide them through the project from scratch, using the materials they knew best, “Good old-fashioned wood – with a little help from modern epoxy glues and a fair amount of carbon fiber to keep the weight within reasonable limits,” he said.
Within 30 days, a shed had been constructed and Castro had begun to introduce the wooden boat craftsmen (under the direction of Hagadone Marine Group General Manager Craig Brosenne and Project Manager Jim Brown) to working with carbon fiber, managing vacuum tables and a host of other materials and techniques. Almost every single component had to either be custom built in-house or ordered from Australia, Italy, New Zealand, Germany or the Pacific Northwest.

“It was like climbing Everest,” says Castro, who suggested that the freedom bestowed by the client was key. “There were no fixed ideas about where we should be going. It grew from analyzing what he wanted to do with the boat. And we all went from there.”
After five years in planning, 18 months and 30,000 man hours in building, Sizzler finally emerged. Sleep and sexy, she exudes a synergy of craftsmanship honed over generations with te latest in marine technologies.

Ultimately, the proof is to take her sailing.

Aboard, one is immediately struck by the sheer simplicity of her design. There are no protrusions. All deck rigging, cleats, winches, sheet ends and other usual paraphernalia – even the mooring lines – are cleverly recessed. The focus of her generous cockpit – its 14 ft beam is large enough to host two four-seat Chesterfields – are the twin helms aft. Overall, though, the waterline beam is kept to a minimum in order to reduce resistance and to maximize performance in light downwind conditions.

Balancing her sleek form is her all-carbon Southern Spars rig, which supports and total of 2,853 square feet of sail, including jib, “Code 0” asymmetric cruising sail, and mainsail (which unfurls automatically from her seductively sculpted carbon fiber boom), all by North Sails, America’s Cup veteran Giorgio Cecchinato was hired by Hagadone Marine to oversee most of the build process on site, particularly in his role as a carbon fiber specialist.

Below deck, much of the forward and stern sections are given over state-of-the-art hydraulics – the heart of her complex sailing system by Italy’s Cariboni Giovanni. Magic Trim systems port and starboard tack and fine-tune the jib. The tech room houses hydraulic pumps and the main halyard winch, run by a dedicated Lewmar Captive Reel winch system. Notably absent is any anchor or chain – a reflection of the vessel’s point-to-point purpose.

Constructed in the traditional manner, Sizzler’s keel was laid first, then the ribs and a first layer of Western cedar planks, followed by three more layers of mahogany laid on diagonally – before 24 coats of painstakingly applied Alexseal with four coats of blue tint built into the epoxy layers. Below decks, the ribs were left exposed, emphasizing the beauty of the wood and paying tribute to the superlative craftsmanship.

While there are no overnight accommodations, the vessel is not in any way lacking for daytime creature comforts. Her very compact but well-furnished cabin contains a carbon fiver galley with refrigerator, freezer, ice-maker and sink – and microwave for making the owner’s favorite popcorn snacks. An X-light Carbon head is to port, along with a gear closet and a small banquette.

Castro met the challenge of merging exterior form and interior function by means of a dramatic, circular, segmented cabin skylight with three carbon fiber braces bonded from the mast to the hull. The Lexan panel not only allows plenty of natural light in below, but also integrates the sleek exterior and mast base with the interior’s rich mahogany, warm cedar and edgy carbon tones, a mix of the traditional exotic.

Under the cockpit aft, even though unseen, the extremely high level of finish is continued, with even the stainless-steel water fuel tanks highly polished. Here are most of the mainsail workings, including the Magic Trim-run main sheet that retracts through the deck. Unusually, the sail drive (which runs a Gori folding propeller) also operates by hydraulics, while the Volvo Penta auxiliary engine is housed here as well. Stored aft also is the hydraulic Cram teak and-stainless steel passerelle, which allows flush access from stern to dock.

Sailing this boat is a sailor’s dream, with pushbutton commands for every task and clear digital readout (on large screens on the cabin bulkhead) of the Brookes and Gatehouse instrument systems, macro-detailing vessel and wind speeds, as well as a myriad of other data. Even the gentles breeze can allow the boat the flex her muscles. But the lake can also produce some serious south-westerlies, which is when Sizzler really lives up to her name.

Under full sail, she can rack at the push of a couple of buttons and her trim features mean that maximizing even the slightest wind is a cinch. However, she also displays an intimate and very tactile responsiveness to her wheel – thanks to a traditional steering quadrant connected to the high aspect ratio rudder – deliberately just about the only component not automated.

Sizzler’s Captain David Kilmer says the boat’s beauty, simplicity and ease of use never cease to amaze. “She sails like a dream. It’s incredible to have 60 feet and 42,000 pounds of boat literally responding by fingertip.”

At dockside, the captain is assisted by Maxpower bow and stern thrusters as well as self0retracting mooring lines.

“My sailing buddies like to give me a hard time about running this boat,” he says with a smile. “They claim I’ve gone soft and all that’s left is a little callus on the end of my finger. But I also notice they’re always begging for a ride.”

He’s already seen plenty of time on Sizzler and knows the lake’s preponderance for producing a stiff evening offshore breeze – known as the Wolf Lodge Express – that brings the boat to life.

While Sizzler’s daytime persona is a knife-sharp, dark sailed silhouette – accented by her gently raked now and overhanging stern – at night she literally shines. Blue up-lights on her boom illuminate a good part of her carbon fiber main, along with 1- lights below the waterline that create a luminescent aura around her. On deck, recessed courtesy bulbs below the seats provide just enough light to move around, and halogen work lights on the underside of her boom illuminate her entire cockpit when needed.
Mr. Hagadone is thrilled with his dream that has turned into reality, and particularly with the manner in which it was achieved.

“She exceeded all my expectations – and we’ve already has some great times on her. She’s an unbelievable boat. Tony (Castro) absolutely nailed it. I never realized there were so many wooden sailboats built – including many of the early America’s Cup boats. And we have some of the finest wood craftsmen in the world right here in Coeur d’Alene. I’m very proud. What they did here is pretty special.”

Says Kilmer, “When we’re under way in the dark, with the rail down, absolutely flying along, and the moon comes up over the mountains… Well, as Mr. Hagadone likes to say… it’s simply as good as it gets.”